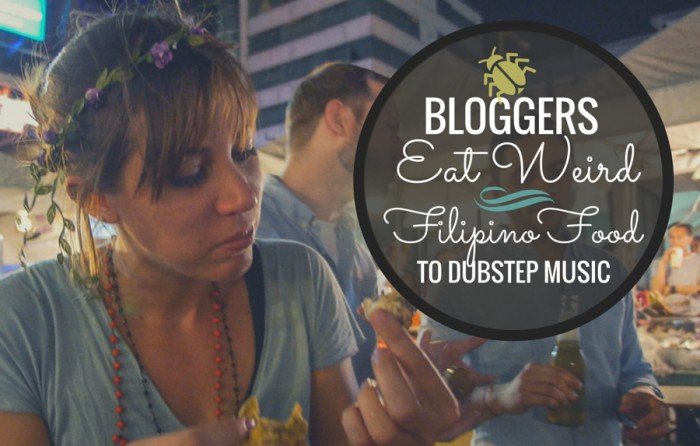 Weird Street Food in the Philippines

Deliciously slimy, fantastically gross. So sheltered we are to the delights that can arise eating the strangest of foods. When all of the animal is eaten, nothing is wasted, and you may find yourself surprised by how much you enjoy the new flavours.

This is a video I filmed featuring three bloggers eating the strangest food we could find and edited to the soothing sounds of dubstep for added enjoyment:

Picture a cute baby duck inside of an egg, almost formed with feathers, eyes and a beak. Only days from hatching it is thrown into a pot of boiling water, never to see the light of day. It sounds horrible, and I suppose it is. But the dish is so popular here I have no qualms in trying it. Served with a side of vinegar and fresh chilli, an entourage of locals “egg” me on to try to gulp it down fast and keep up with the others. It tastes just like an egg… Only the beak and toes get stuck in my teeth.

Slipping and sliding down my throat and splashing into my face are “the worms”. Cute little chicken intestines, fancily decorated on a skewer, covered in delicious sauce, grilled and served with an optional side of vinegar. I found them shockingly tasty and so these cheap morsels became a snacking staple in my Philippine diet.

Tom (Adventure in You) and Will (The Broke Backpacker)

The least shocking and also least delectable of the bunch, these sliced up piggys ears don’t taste like pork, or bacon, or anything other than just… chewiness. Their jaws began to hurt on the first piece and were quickly abandoned for more delicious strange foods

This glory refers to the pouch behind the stomach in the alimentary canal. It contains ingested grits that aid in the digestion of seeds. Yummy, right? The faces of the boys say it all as they attempt to decipher the strange flavour… soft, yet gritty and covered in the famous red sauce that Filipinos love, masking the real taste. Not bad, not great.

No taste. It has no taste at all. After being extracted from the chicken or pig left to coagulate into a gelatinous state, chopped into rectangles and finally grilled (sometimes coated in a BBQ sauce). Having a soft liver-like texture which can be concerning for some, it is perhaps better to dip the stick into the vinegar/chilli mixture to enable some form of flavour.

Trying new, often strange foods is one of the special parts of . Let go of your inhibitions and dive face-first into the next culinary challenge!

What is the weirdest food you have ever tried?

Country: Philippines
Language: Many; officially Filipino, but also Tagalog and English
Currency: Philippine Peso
$1 USD = ₱44.65
I was there: June 2013