How to see Turtles Nest and Hatch (in Mexico) 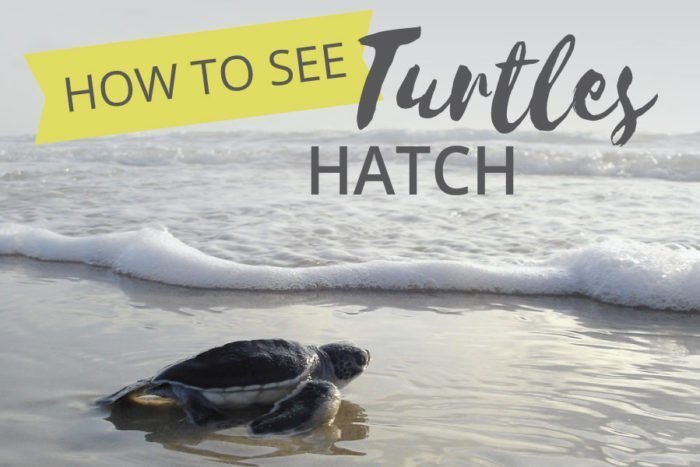 Put yo’ hand up if you’ve seen baby sea turtles hatch? It’s on so many people’s bucket lists but is a really hard one to actually experience. Being there are the right time and dedication to the cause are key. Turtles only reproduce and lay eggs in certain seasons on the beaches that they hatched on during the darkness of the night. Even doing a tour doesn’t guarantee you’ll see this phenomenon in action.

Turtle nesting season in Mexico is frantic. Mexico had a dark history of killing turtles for their meat. This practice is now illegal. Nowadays, it’s rare that the turtle eggs are left on the beach after the mother turtle lays them. Instead, volunteers dig them up and keep them safe in a turtle sanctuary.

Mexico is a fantastic place to see the rehabilitation of turtle numbers in action! The endless sandy beaches mean that if you go at the right time, you’ve got a good chance of either seeing turtles nesting or helping to release baby turtles into the sea after they have hatched in the sanctuaries.

Want to see what it’s like to let go baby turtles? ▸ Here’s a quick video I made releasing baby turtles in Isla Mujeres near Cancun in Mexico.

When do Turtles Lay Eggs in Mexico?

Turtle hatching season Mexico starts in May and finishes up around late November. For a chance of seeing the mother turtle nesting, go to Mexico between June and August.

What Time of Day Can You See Turtles Nest?

In turtle season Mexico, adult turtles will only lay their eggs in the protection of the night, usually from about 11 pm until dawn. The best time to try to see them is as late as you can stay awake. If you do see a turtle laying eggs on the beach, do not disturb her or she may abandon her nest and go back to the water.

When do Turtles Hatch in Mexico?

When do sea turtles hatch in Mexico? To witness the hatching season, the best times to go to Mexico are late August, September and early October. Sometimes you will see turtles hatch as late as November.

Some turtle sanctuaries keep the newly hatched turtles in the sanctuary for around a month to gain strength. When they are released from the sanctuaries it is locally known as a Turtle Liberation (Liberación de las Tortugas). This is usually a community affair with whole families getting involved in the liberation. The best time to be a part of a turtle liberation is in October.

What Time of Day Can You See Turtles Hatch?

There are many dangers for baby sea turtles, which makes seeing them hatch quite rare. Baby turtles can hatch during the day, although it is uncommon. It is much safer for the eggs to hatch in the safety of the night time when the birds and other predators have gone to bed.

Turtle Sanctuaries and hotels will usually do turtle liberations around dusk, and will never release turtles if they can see birds or other predators hanging around. If you are taking part in a turtle liberation this may mean that you could wait some time before releasing the babies onto the sand.

Should you Take a Turtle Watching Tour?

Taking a turtle nesting or hatching tour does not guarantee you will see turtles. It’s all about the timing. The longer you have in Mexico the higher your chances of witnessing an event. I lived in Mexico for two months and I was able to participate in two turtle liberations.

That being said, if you do find yourself smack bang in the middle of the turtle hatching season in Mexico, going on a turtle watching tour will give you a much better chance of seeing something. Another way to heighten your chances of seeing a turtle nest is to ask around at your hotel or at the turtle sanctuary once you arrive.

Many of the hotels in popular tourist areas such as Cancun protect the nests of the turtles that have laid eggs on their property. They will then conduct their own Turtle Liberations when the baby turtles hatch. However, not all hotels will allow guests to take part in the release for the safety of the turtles. It is at the discretion of the hotel to invite guests to take part.

Please be wary of touts on the beach selling turtle tours. Some are not looking out for the welfare of the turtles and are just looking to make money. It’s best to either book a tour through a turtle sanctuary or your hotel.

Where to See Turtles Lay Eggs

The best spot to see them is on the beaches along the Eastern side (along Av. Juarez), particularly the beach in front of Casa Sirena Hotel. Check out my Map for special dropped turtle pins on the beaches where turtle nesting and turtle liberations occur.

So you want to experience turtle hatching Cancun style? On the stretch of beach of Cancun, particularly Playa Delfines and the beach in front of Hotel Sun Palace, hundreds of turtles lay eggs here during the season.

Heading to Cancun or Akumal? Here’s my Budget Guide to the Yucatan Peninsula

Where to See Turtles Hatch and Turtle Releases

The Turtle Sanctuary on Isla Mujeres will have pools full of tiny baby turtles growing strong during the season. Visit them and ask when there will be a turtle liberation. They tend to give less than a day’s warning but may be able to give you an idea. When they do a liberation, the sanctuary invites all the local school children to let them go for free because it educates the youngsters and encourages them to care for the sea turtles as well. They do this at the small, calm stretch of beach in front of Poc Na Hostel.

So you want to see some baby turtles? Cancun ‘Hotel Zone’ has many hotels participating in the protection of turtle nests. Some of the hotels that participate in the Cancun Turtle Release are:

When do turtles hatch in Cancun? Around late August, September and early October.

Sometimes baby turtles can be seen crawling across the beach to the water on Akumal Beach in Puerto Aventuras. Nests that weren’t discovered are the reason for this amazing phenomenon. During nesting season, Centro Ecológico Akumal offers nightly turtle watching walks from May to the end of September.

If you find yourself in the Akumal turtle season, you can go snorkeling with them at Akumal Beach, however, usually overcrowded!

Turtle season Tulum means that there are turtles hatching on the beaches all the way from Tulum to Akumal (27 km / 17 miles of beach). As mentioned above the Centro Ecologico Akumal does nightly tours. Near to the Biosphere Reserve in Tulum is a company called Kanan Aak (they don’t have a website) who are dedicated to the protection of sea turtles.

For the best chance of seeing turtles hatch naturally in Tulum, stay at one of the hotels along the beach and just hang around (hard I know)! Some areas of the beach are better for the turtle nesting because they turn their lights off at night when the turtles nest (turtles don’t like the light when they nest).

Hotels that are well-known for having turtle activity happen around them are:

Click the links to see prices to stay at these hotels. Or simply book a tour to snorkel with the turtles in Akumal.

READ: The Best Cenotes near Tulum

Turtles thrive along the Pacific Coast if Mexico and one of the best ways to get a closer look at baby turtles is to be a part of a turtle release. Puerto Escondido is host to an up-close turtle liberation every single day thanks to the Olive Ridley Turtles that breed consistently throughout the year.

To be a part of the turtle release in Puerto Escondido, head to Bacocho Beach at 5 pm. There’s a shack on the beach right in front of the car park – you won’t miss it. Because the turtle releases happen every day, bookings aren’t needed and you can just turn up! The cost to let go a baby turtle is $100 pesos per turtle. There is also a cheap tour you can book which offers pick up and drop off which heads to a different beach, Playa Palmarito.

Mazunte is on the spectacular Pacific Coast of Oaxaca, right next to Puerto Escondido. The Turtle Sanctuary in Mazunte allows small groups of guests to free baby turtles once they have paid to do the tour. The best time to see turtles is between July and January when Olive Ridley turtles arrive in large groups.

The Oaxacan coast is famous for Olive Ridley (or Golfina) turtles which have a slightly different season to other turtles. The Olive Ridley nests at all times of the year, with peak nesting occurring between September and December. Young turtles will hatch about 45 days later. This famous Oaxacan coast can see huge groups of 1,000 or more (called “arribadas”) Olive Ridley turtles emerge to lay all at exactly the same time.

When do turtles hatch in Puerto Vallarta? Between the months of June and September. Once the eggs are laid it takes 45 days for the baby turtles to hatch.

The turtles in Puerto Vallarta come to shore and lay their eggs at the Bay of Banderas, the natural formation of the bay protects the turtles from predators. You can book a tour here to experience the turtle release.

Puerto Vallarta has a number of participating hotels that care for the beaches that the eggs are laid on. Many Puerto Vallarta hotels provide guests with a unique opportunity to participate in the release of baby turtles, including:

We are a participant in the Amazon Services LLC Associates Program, an affiliate advertising program designed to provide a means for us to earn fees by linking to Amazon.com and other affiliated sites. For more information read our disclaimer.

Got any other great spots to see turtles in Mexico? Tell me in the comments below!

Get A FREE Personalised Savings Plan & Kickstart Your Travels TODAY!

Want to save money and travel the world? Join the mailing list and we will help you quickly & easily add up what you can save and how quickly you can save it!
Don't worry, you can unsubscribe at any time!
This site uses cookies: Find out more