The Mud Statues of Kolkata You Probably Never Knew About 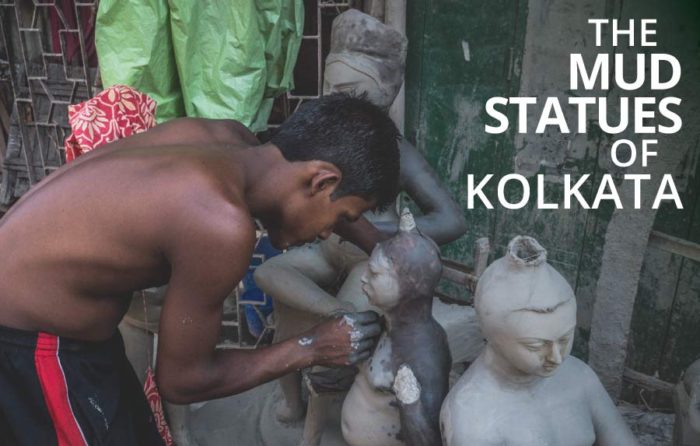 Why must some of the soil used in the statues of goddesses come from the land of a prostitute?

Lost in the winding, dirty streets of Kolkata, India, hundreds of people work round the clock to create beautiful artworks made of mud. Kumortoli is the potters’ quarter of Kolkata and the mud statues that are created here are exported all over India for festivals throughout the year.

Building the statues begins months before the festivals start. A prayer to Ganesha opens the ritual and the construction begins.

The mud is used from the sacred river Ganga or imported from other areas of India. Hay and bamboo are moulded and bound into shapes to make the skeletons of the idols.

The statues are crafted, then dried, mud is added and dried again until the craftsman is happy with their work of art. Some have a very intricate detail, while others are more simple or abstract. A single, life-sized idol usually takes seven days to complete in full.

The work is divided among all, some chisel facial features while others build the “skeletons”. Artists take great pride in their work. They say that working on the face is always the trickiest because it is the emotion on a face that completes the god-like look of the idol. The eyes must be deep and fierce!

The goddesses are dressed in fine silk saris, with elaborate jewels and put onto a stand. Smaller idols are sold while large ones are placed in temples.

READ: What to Pack for a Trip to India

The strange history behind the Durga mud idols

There are many festivals that happen year-long all over India. But perhaps the most interesting might be one that is particularly popular in the East of India; Durga Puja.

In India, all rituals are sacred. According to the Hindu ritual for the preparation of the Durga idol, four things are of utmost importance: mud from the Ganga River, cow urine, cow dung and soil from a prostitute’s land (forbidden territories). Without the soil from the forbidden land, the statues are deemed incomplete. This is a ritual that although it has been custom for years, no one really understands or knows why.

During the last day of Durga Puja (October 15th), statues of the gods are floated down the sacred river that their mud was originally pulled from. After some time the statues sink, and the mud goes into the river once again. This symbolises the return of the god and goddesses back to nature.

ⓘ How to get to Kumortuli to see the mud statues

Although the Durga Puja festival is usually in September / October every year, you can see the mud statues being craftily made at any time of year in Kolkata.

The closest train station is Sovabazar metro station in North Kolkata. From there the mud workshops of Kumortuli are an 11-minute walk.

Most of the workshops are centered around Bonomali Sarkar St. So start here and find yourself getting lost.

WHERE NEXT? Head to Varanasi, the Holiest City in India

Have you ever seen an Indian festival? What was it like?

Previous Post4 Transport Options in Sri Lanka you Should Try!
Next PostThe Evolution of Travel Luggage