How to Kill a Man With Your Bare Hands [READ] 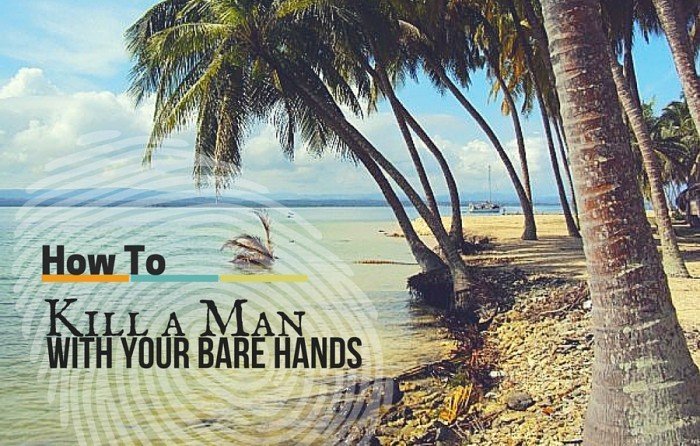 All the events leading up to us ending up on a deserted island with an ex-soviet soldier seemed perfectly normal at the time. When I think back on it now, however, I’m surprised by how easily Grace and I had accepted this man’s offer. A huge, muscly man we’d never met before.

The San Blas Islands; 365 deserted, one-palm-tree island paradise. Sunken ships to snorkel, phosphorescence to swim with, lobsters to buy for a criminally low price, this place should have gone down in our memories as one of those dreamlike, epic experiences. And it was, but not for those reasons.

Except for the locals: the Kuna people, who only inhabited a few of the islands, we had the entire place to ourselves…in the rain. And by rain I mean torrential downpour “is there a typhoon nearby?” type rain. Disheartening is one way to describe how we felt spending two days in this “paradise.”

Upon the morning of our intended departure the sun made its first appearance in a week and the clouds slipped away to ruin someone else’s fun. We slowly sailed past an island with a shack, a pier and a smiling man on it. “Huloooo” he chimed with a strong Russian accent “would you like some tea?” Of course we wanted tea, anything to prolong our time spent in these rays of sun before heading to the dirty, smog-filled city.

Halfway through our third cup of tea and our second freshly machete-cut coconut, Slava looks at us in all seriousness. “You don’t have to leave today, you know, you can stay here, in my shack!” “But our boat…?” I weakly questioned. “The next one is fine, tomorrow, or the next day!”

Drunk on the warmth of the sun and blinded by the reflections in the perfectly turquoise sea we accepted Slava’s offer to sleep with him in his tattered bamboo shack.

He explained how it was his job to install solar power and fix all the Kuna people’s electricity. Genius Slava.

He showed us pictures of St Petersburg and told us stories from the war. Tortured-soul Slava.

We went snorkeling around the pier that Slava lazily threw his fishing line from. When it was too dark to swim any more Grace and I dragged our backpacks into the shack to get changed. It was dark, bar a small light that ran from a generator out the back. On his rickety table lay an open book written entirely in Russian but clearly detailing with illustrations on how to kill a man with your bare hands. Assassinator Slava!

Grace and I deliberated about the best way to deal with this latest hiccup. In the background Slava chopped pieces of wood for the fire with his huge machete, sweat pouring from his equally large muscles.

Slightly intimidated but determined to get to the bottom of this murderous book affair, we decided to confront Slava over the buffet of freshly cooked seafood he had painstakingly prepared for us. It was then that Slava explained to us how he came to live on this island. After Real Estate business in Costa Rica had gone sour, he was now on the run from the mafia because he’d put an axe through one of the henchman’s skulls. Psychopathic Slava!﻿

As the story bore on we came to realise that this Russian unit wasn’t a psycho, just a simple man whose crazy life had caught up with him.

It wasn’t his fault, you see, as he was only minding his own business when they had entered into his house to teach him some sort of a lesson after a deal gone wrong. In an act of self-defence one of the henchmen had ended up with brain damage. After this axe-ciddent, he was lucky he wasn’t dead. And now Slava hid on this island paradise, fixing fallen-coconut damaged generators.

The next morning Slava was noticeably upset by our plans to leave his island. Despite the tear that threatened to escape down his cheek, he phoned the boat for us and waved solemnly as we slipped away over the clear sea. No exchange of details was made and we were sure we would never meet again. Only stories are left now. Poor lonesome Slava.

When were you ever in a situation where it could have gone WAY worse than it did? Tell me about it in the comments below.

Thanks for Reading! This was written with a whole bunch of effort and energy just for you! If you liked it, please share it X