How to Cross the Thailand Cambodia Border without being Scammed 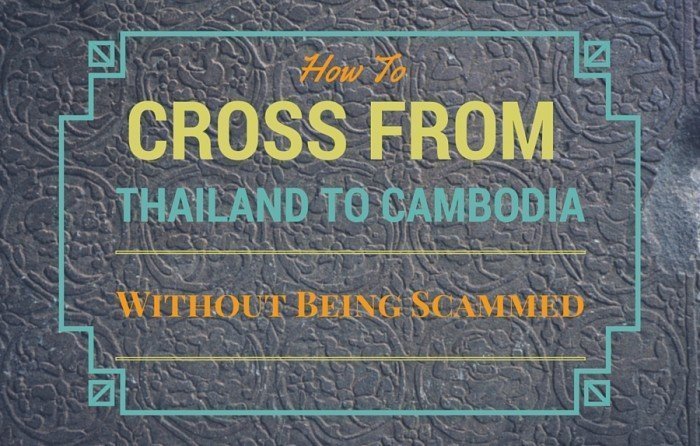 11 Thailand-Cambodia border scams and how to avoid them

The Thailand-Cambodia border cross at Poipet is possibly the most stressful cross I’ve ever had to do. And I‘ve done a lot of border crossings! Here’s a post about all the times I was almost scammed with details on how I avoided it (or didn’t manage to!)

If you’re totes cool with being ripped off then just take the tour and stay chill. But if you’re as skint as me and hate supporting the corrupt system, then follow this easy guide.

There are two modes of transport to cross this border

Want to take the tour bus? Book your bus tickets from Bangkok to Siem Reap here.

Both ways have a huge amount of scams going on. Mode #2 may be worse because your guide that you are supposed to trust is actually scamming you in several different ways.

Signs in the official travel offices in Bangkok where you will buy your bus ticket state ‘No Scams.’ I call bullshit, they will still try to scam you. It’s almost impossible not to get scammed at this border.

I just booked the cheapest bus possible and tried my best to avoid being scammed by knowing exactly what I should and should not pay for.

The bus will stop at an expensive restaurant on the Thai side of the border and you will be told you need to wait for visa processing for a couple of hours. This is to try to get you to buy food here.

At the restaurant the bus “guide” asked for our passport and 1, 200 baht ($40USD) to process the visa. This is a scam as it officially costs $25USD** for a visa. He insisted, saying that this price was for a ‘fast, extended visa.’ When I refused the guide got angry. He said that I would hold up the whole bus because the visa will take three hours to process and that the 1, 200 baht visa will get me one year instead of three months. He pushed more by saying that I would make everyone angry and the bus on the other side of the border would have to leave without me.

**UPDATE: Official cost of a Tourist Visa has risen to $30USD

I firmly told the guide that I would be crossing the border myself. I gathered a few people from the bus that also didn’t want to pay extra and our bags and we physically walked to the border. We went as fast as possible so as not to hold up our group on the other side. To leave Thailand, you MUST get a stamp out, which is relatively painless and the line is quick.

Once we had the stamp out, we walked over to the ‘Official’ visa office which is a building on the side with a sign stating: The Office of the International Border Check Point of Poipet. I say “official” because even in here they will attempt to scam you.

We sat there for a while and firmly repeated that we didn’t need to pay this cost. Eventually they let us through as they realised they were wasting their time. It may be useful to have the phone number for your hotel or any contact in Cambodia that you can call and back you up if the office is insistent.

At the ‘official’ office I was told that because I didn’t have a loose passport picture I would have to pay for them a $10 for four pictures. Even if you have one picture they may ask for three (officially, you only need one).

I tried really hard to get out of it but I ended up paying the price because I did not have a spare picture. While travelling around South East Asia always carry a few passport pictures with you because occasionally you will be asked for them.

I was told by a hawker that we would need Cambodian Riel exchanged to be able to buy anything in Cambodia, including the visa and the bus ticket. We already knew this wasn’t true and that Cambodia will take USD almost everywhere, as well as Thai Baht in some places. Do not exchange money to Riel, USD are worth much more.

After the ‘official’ office you must go to a second office for your stamp into Cambodia. I was offered to skip this line by a hawker for a 200 baht fee. Refuse, because this step cannot be skipped. Everyone must be with their own passport for this section of the border cross for identification.

After all that it did not take three hours to get through the customs. We actually got through faster than the rest of the group and didn’t hold anyone up. We were, in fact, the first people to arrive at the bus stop on the other side.

Once through customs there are two ways to get to Siem Reap (two hour drive from the border). Most people will continue on with their tour, catching the bus from the bus terminal 20 minutes out of town (there is a free transfer bus). However if you stay near the border you can also haggle a taxi for cheap (as low as $8) to take you all the way to Siem Reap. This is a more immediate and stress-free option.

The free transfer bus took us 20 minutes away to a bizarre empty building where the kept us for a couple of hours before the buses going to Siem Reap started turning up. We found that buses only ran after 3pm and we had arrived at around 1pm. The terminal was empty except a few hustlers who offered expensive ($45) “private vans” to Siem Reap.

I have done this border cross twice. The first time I took the free bus back to the border and haggled a taxi for only $8 all the way to our hotel in Siem Reap. I highly recommend this option to save time and hassle. The second time I waited and took the free bus after a lot of hassle and fighting with the operators.

At the initial restaurant on the Thai side of the border everyone was given pink identification stickers. Once at the terminal in Cambodia I became aware that everyone was wearing the same pink sticker. Written on the sticker of the groups who refused to pay the 1, 200 baht was “A0 25”. Everyone else’s said “A2 25”. After some time I noticed that everyone with the “A0 25” written was denied buses for hours, while the people who paid the scammers were all let on.

I took the sticker off and then began to just walk onto buses that were about to leave. Eventually the conductors lost interest in trying to stop us and just let us on, un-scammed.

On the bus to Siem Reap (about an hour in) the bus stopped and the conductors told us that they were at least two more hours from Siem Reap, so we should buy buy food there. Prices were expensive for Cambodia and at this point a lot of people were very hungry. However, we were actually only 45 minutes from Siem Reap and they stopped at the restaurant to try to make us buy expensive food.

Finally in Siem Reap we were dropped off at a bus terminal four kilometres out of town (they told us it was 7km) and we had to pay whatever price the tuk tuk asked as there was literally no one else around to bargain with.

Avoid this by having your hotel pick you up if they do pickup, or barter with the tuk tuk drivers as hard as possible.

READ: Going to Cambodia soon? Check out this awesome Budget Guide to Cambodia

Final note about dealing with scammers

Be confident and firm. Don’t get emotional but stick with it. They have so many other people to go and scam that if you waste enough of their time, eventually they will drop it. Now go and good luck!

Tell me about your worst ever scam and how you overcame it in the comments below!