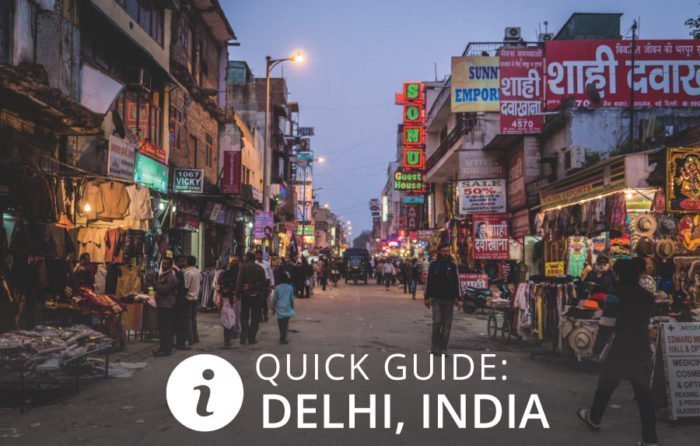 Bustling and busy Delhi can be very overwhelming for the novice traveller. I know it was for me. For the first couple of days, I found Delhi just too hectic to be able to actually enjoy it. But after a while, I started to get into the groove of the place and found a way to move with all of the other 18.9 million people that reside in this bustling city in India.

Delhi became a central hub for me during my six months in India. I found I would return to Delhi many times. To help you with your first time in Delhi I have put together this quick guide.

ⓘ THINGS TO DO IN DELHI

There are loads of things to do in bustling Delhi. And I found the best and most fun way to get around them all was by hiring a rickshaw driver for the day. He took us to three sights and drove us all over Delhi for only 150 rupees ($2.50) USD. At each site, we just went in and checked it out and he was waiting for us outside when we’d finished. Because I went with 2 other friends it was honestly the cheapest tour I have ever done!

The Red Fort was constructed in 1639 and was the main residence of the Mughal dynasty for almost 200 years, until 1857. It’s an extremely impressive brightly coloured structure with a rich history that is worth visiting while in Delhi.

Located next to the Red Fort, the giant Chandni Chowk Markets combines all the colours, sounds, smells and sights of exciting India in one place. Stalls spill onto the street and you can literally buy anything.

The India Gate is an extremely popular site for Indian tourists but is definitely cool to see as a foreigner as well. It is a huge war memorial dedicated to soldiers who fell during the First World War.

The Lotus Temple is a beautiful marble structure that cost $10 million to build and serves as the Mother Temple to the Indian subcontinent. Its doors are open to people of any religion and it is a popular tourist attraction, meaning the lines are very long to enter.

READ: 3 Unique Things to do in Delhi

✇ HOW TO GET AROUND DELHI

This is perhaps my most favourite way to get around Delhi. It’s exhilarating and feels like you’re experiencing the “real Delhi” without being crammed on a train. You should be able to hire a rickshaw driver for a few hours to take you to some of the Delhi sights for quite cheap.

The rickshaw drivers will often try to take you to goods emporiums. This is because they get a commission from the storeowners. Sometimes your driver will even throw in a shop or two as a price bartering tactic. If you feel like helping your driver out, then just go to an emporium. If you don’t feel up to it, be clear and tell them firmly that you don’t want to go, even offer to pay them a little more in exchange.

The metro is a quick and cheap way to get around Delhi. I found it pretty easy to use and usually not as busy as I’d expect. There are carriages dedicated to women, which made it great to use as a solo female traveller.

✈︎ HOW TO GET AROUND INDIA

There are a few great ways to get around India. The best way for you will really depend on how much time you have, how cheap you want your travel to be and how tolerant you are of India’s enigmatic inner workings.

By far my favourite way to get around India is by train. The National Rail Network covers most of India. Train travel can be as cheap or expensive as you like, from shared carriages with dedicated beds to first class private cabins. I would only recommend Sleeper Class 3-tier at the absolute minimum class to travel in. It can get extremely uncomfortable and sometimes dangerous in term of things being stolen if you travel in the second-class unreserved carriages.

I always recommend choosing air-conditioned cabins because India can get extremely hot and you may not always be able to access a window for air. I would also suggest trying to get the top bed on sleeper 3-tier or 2-tier carriages. This is because the middle and bottom seats become public domain during the day and I much preferred being able to sleep or read the time away rather than sit next to hordes of people who would appear out of nowhere and completely fill up the seats.

Booking trains in India can be difficult sometimes. Especially for backpackers who don’t have exact dates of travel. Reserving cheap seats on the trains means you are almost always put on a waiting list that sometimes you will not know if you can get the train for sure until just before departure.

Buses are another extremely cheap form of travel between places in India. The sleeper buses with private boxes are especially good. Generally, buses will go almost everywhere in India including the Himalayas which aren’t covered by the rail network. But sometimes the buses are really old and things just don’t work which can make the journey uncomfortable. Also, the buses do not usually have toilets and don’t make regular stops, causing me a few hiccups during my travel in India.

Air travel within India can be surprisingly affordable especially when comparing to North America or Australia. This is the best way for people who are short on time to get around. There are many airlines serving domestic flights within India so I would suggest booking online and using a search website like Skyscanner.

READ: India Packing List: All You Need to Know

⍾ WHERE TO STAY IN DELHI

There are several areas around New Deli that are popular for tourists to stay. Paharganj is a favourite among budget backpackers due to its high volume of cheap hotels. Places near the Red Fort are also popular and also right next to Chandni Chowk Markets and the Lal Quila metro line. Finally, the posh Ashoka Road in New Delhi is adorned with luxury hotels and high-class restaurants.

Capsule Den: With hostel-style bunkbeds, which is a difficult thing to find in India,  this place a great option for solo travellers looking to make friends in Delhi. Capsule Den is extremely high rated on Booking.com because of its friendly staff and clean rooms. Featuring air-con, private bathrooms and free WiFi these rooms are also super cheap starting at $4 USD per night!

Yes Please Guest House: Located right next to New Delhi train station this little hole-in-the-wall guest house is perfect for budget travellers. It has basic but clean amenities, private bathrooms and free WiFi in public areas. It is located on the Main Bazaar road in bustling, popular Paharganj. Rooms start at $6 USD per night.

Couchsurfing: I did a bit of CSing in India and the one I did in Delhi was extremely memorable for many great reasons! I stayed with a lawyer in a ritzy area of Delhi, with my own bedroom. He took me to parties and I met a lot of his friends who were all great people. I have absolutely nothing bad to say about Couchsurfing in India!

Bloomrooms: These gorgeous bright yellow-themed art deco rooms in New Delhi have all the modern comforts one would want or need. It kind of feels like a modern hotel made entirely of funky IKEA furniture, but that’s not a bad thing at all! Featuring international power sockets, air-con and free WiFi, this Insta-worthy hotel is great value starting at $70 USD per night.

WHERE NEXT? Amazing 3-Day Jaipur Itinerary

What is your favourite thing to do in Delhi? Tell me in the comments below ↓