Top 10 Quirky Free Things To Do in Japan 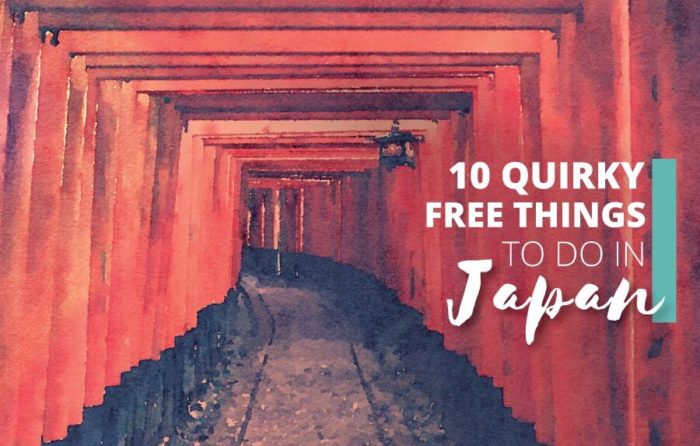 The best list of quirky and FREE things to do in Japan. Try them all!

Japan is arguably the world’s best country and home to the most successful civilization in history, but all that comes at a price. Indeed, it doesn’t take much research to show that Japan is one of the most expensive countries in the world, in terms of prices for lodging, transportation, and luxury goods, to name just a few big expenses travelers to Japan face.

Certain things in Japan, however, are cheap—or even free. In addition to the fact that you can easily get a sushi meal in central Tokyo for under ¥1,000 (about 10 USD), some of the country’s most popular attractions and experiences are completely free. Here are seven Japanese activities you can enjoy free of charge, which leaves more yen in your pocket for pricey past times you’re also sure to pursue.

THE 10 BEST FREE THINGS TO DO IN JAPAN

Seeing cherry blossoms in Japan can be an expensive pursuit, overall, given how much the prices of hotels go up during the months of March, April and May when Japan erupts in a sea of pink and white. However, many popular hanami spots, such as Tokyo’s Chidorigafuchi moat, and the Philosopher’s Path in Kyoto, are accessible completely free of charge.

The same can be said when it comes to fall colors in Japan. Whether you walk along the Nakasendo in the Japanese Alps, explore underrated small towns like Takayama and Shirakawa-go or admire the golden ginkgo trees of Meiji Jingu Gaien in the heart of Tokyo, you don’t have to drop a single yen to see the beauty of the seasons in Japan.

Tokyo is actually an interesting case when it comes to the larger topic of free things in Japan. You see, while Tokyo is known as one of the most expensive cities in the world, many things in Japan’s capital are free. My favorite among them is probably the wide variety of viewpoints where you can take in a panorama of the sprawling cityscape.

Popular options include the Tokyo Metropolitan Government Building in Shinjuku and the Bunkyo Civic Center, but I’m a fan of more obscure choices as well. At the Tourist Information Center in Asakusa, for example, you can get a bird’s eye view of both ancient Senso-ji Temple and the ultra-modern Tokyo Sky Tree. In Ichikawa, meanwhile, you can go to the top of the I-Link Tower and, on a clear day, marvel at Mt. Fuji towering over the Tokyo skyline.

Food in Japan isn’t nearly as expensive as many make it out to be unless you’re (A) dining at Michelin-starred sushi joints or (B) purchasing fruit at one of the places I’ll mention later in this article. To be sure, while the takoyaki octopus fritters and kani doraku grilled crab you can purchase along Osaka’s Dotonbori pedestrian street are pretty cheap, walking along picturesque Dotonbori itself is 100% free.

Other great street foot spot in Osaka to take pictures worth 1,000 words without spending even a single Japanese yen include Shinsekai (that’s the place with a huge blowfish hanging over it) and Kuromon Ichiba Market, which is at its busiest and most photogenic in the morning, when local people from all over the Osaka area come here to buy seafood.

Whether combined with the nearby subway station of the same name or considered separately, Tokyo’s Shinjuku station is one of the busiest transport hubs in the world. And even if you choose to come to Tokyo Station (or railway depots in Osaka, like Namba Station, or Kyoto’s 11-story central station, or dozens of other places in Japan), people watching at places like these is one of the most fascinating free things to do in Japan.

That’s because while millions of people can pass through Japanese train stations in a single day, there is a level of control and even politeness that pervades. You’ll rarely see people pushing (at least not with any malicious) intent; in fact, you might not even witness any collisions, since the Japanese tend to be extremely mindful, even at the height of rush hour.

The Most Instagrammable Kyoto Landmarks

It might surprise you, given what a tourist hub Kyoto is, that many of its famous spots are free to enter. This is true not only of Kiyomizu-dera, which is within the traditional confines of the old town but also for Fushimi Inari shrine, whose mesmerizing orange gates are located about 15 minutes from Kyoto Station by train.

The best part about Fushimi Inari being free, beyond the hundreds of Instagram likes your selfie is likely to get you? You can hike up to several viewpoints, which are as close as 30 minutes from the bottom and as high up as two hours, which means you can theoretically spend half a day enjoy free activities in Kyoto, while many other travelers spend a ton of cash.

On one hand, it probably sounds obvious that the Hiroshima Peace Park is free. After all, it would be inhumane, arguably, to charge people to visit a place that commemorates one of the saddest chapters in history. (The nearby museum, for what it’s worth, does charge an entry fee, though that makes sense given how extensive the exhibition is).

Another Hiroshima-area attraction that’s free, at least if you have a Japan Rail Pass, is Miyajima island. Famous mostly for the floating torii gate of Itsukushima Shrine but also the wild deer that roam its shores, you can get here by boat from Miyajimaguchi station, where a JR-operated ferry departs every few minutes.

If you’ve ever been to Japan, you know that some of the most ordinary experiences in the country (from the perspective of Japanese people, at least) can be the most fascinating to Westerners. A great example of this is the Japanese department store, particular the luxurious examples you find in the upmarket Tokyo district of Ginza.

Indeed, it’s ironic that this is one of the best free things to do in Japan, given how expensive some of what’s sold here is. Among the most fascinating items you’ll find? “Designer” cantaloupes and other melons, which can sell for prices nearing ¥100,000 yen, or around $1,000 USD. Good thing it’s free to snap a picture!

Japan is one of the most expensive countries in the world, but it’s filled with free things to do. From strolling through sacred sites during the cherry blossom season and as Japan in autumn blazes to life, to observing quotidian peculiarities many other travelers might take for granted, enjoying Japan doesn’t have to cost you a penny (or yen, as it were). Best of all, the more free things in Japan that fill up your Japan itinerary, the less stressed you’ll have to be about the splurges that are sometimes necessary here. 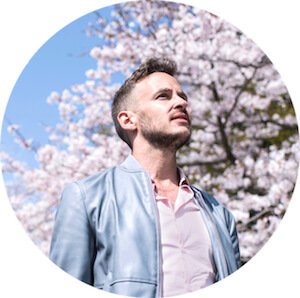 Robert Schrader is a Japan-obsessed writer and photographer who created Japan Starts Here, among other reasons, to dispel the notion that Japan is always expensive. His next trip to Japan will see him return to the Kansai region around Kyoto and Osaka, and spotlight fall color spots ubiquitous and obscure. Follow Japan Starts Here on Instagram, Facebook and Twitter to stay up to date.

What other quirky things can people find in Japan? Tell us about your weird and wonderful experiences below!

READ: Should You Go to Japan During the Golden Festival?

Previous PostHow To Save Money for Long-Term Travel
Next Post12 Enriching Free Things to Do in Bangkok, Thailand