Top 10 Most Dangerous Biking Roads in the World 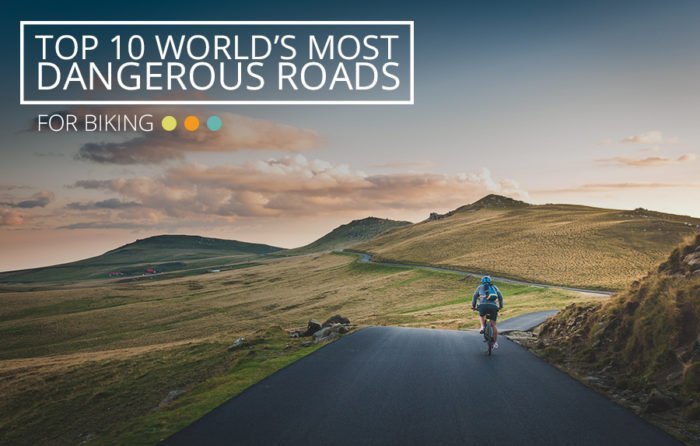 The Most Dangerous Biking Roads in the World

I love cheap travel, especially when it comes to cycling. I’ve cycled a lot and come to the conclusion that no road that’s entirely safe. While every road holds some potential danger, others can be simply regarded as death traps, especially for cyclists. In other words, you deserve a medal if you ride through them and emerge alive! These are the world’s most dangerous biking roads, EVER!

Stretching for 40 miles (from La Paz to Coroico), Bolivia’s Old Yungas has claimed hundreds of lives. The cliffs, the numerous sharp turns, the sheer narrowness, the tumbling rocks, the numerous mudslides, and the frequent fogs explain why ‘El Camino de la Muerte’ (or The Death Road) claims 300 to 2000 lives every year.

There are many places to cycle in China and one place that’s often missed is the Guoliang tunnel road. It’s only a mile long, but tolerates no mistakes. The road is only wide enough for the very careful and more experienced riders. What’s even more terrifying is the fact that the road was constructed by 13 people drawn from the local villages.

The tunnel twists, dips, and turns in unpredictable places that will leave any new biker white-knuckled in terror at what could happen at the next slippery blind spot of a bend.

The road is located in Agrafa, a mountainous region in Greece. Connecting Patiopoulo and Perdikaki, the road is full of potholes, loose and slippery gravel, twists and turns, numerous narrow and steep sections, and has a sheer drop on its edges without rails to protect road users from plummeting off the edge. This is easily one of Greece’s most dangerous biking roads.

The road is in poor condition, but that is not the only reason for its blood-curdling nature. The steep cliffs and bad weather hold the answer to the many deaths witnessed on the 2,700-mile stretch.

If you survive these, you will likely fall right into the hands of bandits and gangs that control the poverty-ridden regions of the country through which the road passes. You’re quite a way from luxury biking here, but that’s great, it wouldn’t be an adventure without a little bit of danger!

Nicknamed as the Highway of Death and considered the most active road for sexual exploitation of children, this road demands 100 percent concentration and sturdy nerves to negotiate it.

The name of this road itself should set your hairs standing on their roots. This 40-mile stretch of magnificent chasm of cliffs and mountains between Jalalabad and Kabul has claimed so many lives on a regular basis that most people stopped counting.

The road is a true test of cycling as it abounds in twists and dangerous turns with wheels hanging scarily close to the edge. Threat from Taliban aside, during snowfalls, the road remains closed and users can wait for several hours in the bitter winter conditions.

If you want to enjoy one of the most breathtaking sceneries, the Stelvio Pass is the place to be. However, there is a price to pay. For starters, it is located more than 3,000ft up in the Alps.

You will also have to deal with sharp corners, and in winter, icy roads. The low concrete barriers may not help to keep you up there if you make a single mistake.

Built in late 18880s, this road stretches for about 40 kilometers in western Colorado. The highway is just fine as long as you don’t get caught in its highly unpredictable harsh weather conditions.

Summer temperatures range from 50-700F (around the mountain passes) to 70-900F (at the highway ends), and it doesn’t take much time for to change from a bight sunny day to heavy snow fall. Biking is particularly scary on rainy days as storms cause some frightening waterfalls along the highway.

Stretching over 11,000 kilometers from St. Petersburg to Vladivostok, it is considered as the longest national highway globally, and if it’s a biking challenge you are after, this highway should be on top of your list. You could cycle the whole thing while camping out along the route. The road crosses everything from tundra to the forest to long stretches of narcotizing emptiness.

Unpredictable heavy snowfall, avalanches, and landslides make biking on this highway extremely challenging. You also need to be prepared for reckless drivers considering that Russia has one of the world’s highest per-capita death rates of drivers due to drinking.

It is one of the dangerous biking roads that try to pull a safer look. Stretching 7.5 miles long, it doesn’t have too many sharp turns; it is wide and it is not located up in the mountains. However, there is a reason for the locals to christen it ‘Killer Highway’.

It has claimed thousands of lives, courtesy of the poor drainage system that makes it a danger during storms as well as heavy traffic which includes motorbikes and pedestrians.

The 155-mile stretch has its fair share of deaths. Located in the Himalayas, many people shun it for its steep climbs and poor road surface. If you attempt to bike through it, be prepared for numerous potholes too.

There are many roads that did not make it on this list. But that doesn’t mean that they are less horrid. The ten I have listed here are just eye-openers. Remember, dangerous biking roads don’t have to come with a tag or a warning sign.

Most of them seem safe enough until you meet other unfortunate users. The key to ensuring that you bike safely through any road is to be informed about any potential dangers on the road – and to always keep your eyes open.

What is the most dangerous road you’ve ever travelled?