Being Lesbian in Turkey (A Story) 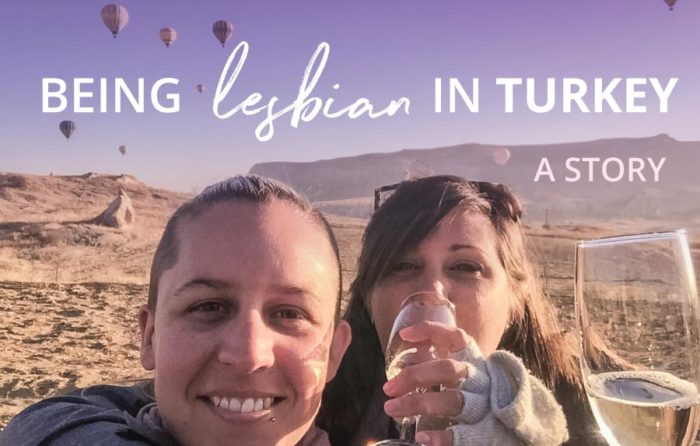 The time my girlfriend and I unknowingly went on a surprise double date!

NOTE: This story contains swear words / rude words. A  LOT of them.

I’d gotten to the point where I was desperate for new friends.

Although I’m travelling with my girlfriend, I really love being around lots of people. I’m a social person. So we hadn’t made even a single new friend in the two months in Greece. Bar one elder man who ended up being a raving Brexit supporter and tried desperately to get a better look at my ass despite telling him several times he was making me uncomfortable.

In Turkey, we had high hopes. Turkish people were very friendly and things were looking up in that department.

We ended up in their office in Cappadocia after-hours drinking and roasting chestnuts on the fire. The situation was innocent enough. Although I’d pushed my girlfriend to do it because I had been so devoid of other people to talk to since the start of our travels. These two guys seemed pretty cool, they were friendly and funny.

About an hour into the night, Jodie and I realise that maybe these guys don’t know we are together. I try to show it (without actually “coming out” to them) by touching her on the leg and lightly stroking her hair.

But this isn’t enough. When Jodie goes to the toilet, Ibrahim* gets a bit too close for comfort. I quickly realise he still does not have any idea that we’re a couple.

They invite us to go to a viewpoint at the top of town. It’s a short quad bike drive away. I’m not so sure whether we should go. But Jodie, in her attempt to be social, had already said yes.

We talk about who will drive and Ibrahim insists I go with him. But they have been drinking quite a lot and it’s late at night. Ali* seems to be a lot more sober. I was in a car crash when I was younger so anything sketchy to do with cars and vehicles makes me pretty nervous. Because of this, Jodie and I agree I will be doubled by Ali who will drive very slow, and Jodie can go with Ibrahim who will do the same.

We get to the top and Ali had been great. He drove very carefully. Ibrahim, on the other hand, has gone up on two wheels and just generally drove like an idiot. Mother fucker. I’m glad I didn’t go with him.

We start drinking at the viewpoint and the boys decide to step it up a notch.

They are getting between Jodie and me, trying to split us up. I need to go to the toilet so Ibrahim walks me there. He’s touching me and just generally acting as though I am with him.

I quickly go to the toilet and rush back to Jodie, despite his efforts to pull me away to a different area.

I walk straight up to Jodie and bluntly exclaim: “We need to tell them, NOW”. She says “right” and both of us stand up.

It’s pitch black, the wind is whipping at us hard and we have to yell to be heard. We are basically on a movie set recording for the most dramatic climax you’ve ever seen. Think “I killed Mufasa” from the Lion King or some shit.

Ali is non-stop talking over us and Ibrahim has walked away clearly drunk and frustrated. We yell at him to come back over to us. When he comes back Jodie screams into the wind: “You need to know; WE’RE TOGETHER!”

They look confused. We are confused by their confusion.

I ask them if they know what Lesbians are? They say yes so we tell them we are lesbians.

This is by far the strangest coming out I’ve ever done.

Both appear very surprised despite Jodie and I continuously giving them hints and flat out turning down their advances. Ali changes his tune and starts to say that he knew we were lesbian but then Ibrahim had asked him to “help him out” so he still tried.

Being drunk at the time this comment didn’t really hit me until the next morning. When I realised that Ali had told Ibrahim that we were together and they both ignored that and continued to split us up, that stung. I thought we’d made friends… They literally just saw us as a possible fuck.

Back to the windy lookout and Ibrahim is yelling repeatedly: “Why we don’t just try a man for one night?”

Jodie tells him we have tried men and don’t want to do it again. Thanks but no thanks.

But Ibrahim keeps pushing us… Why won’t we “JUST TRY IT!?”.

It’s frustrating and stupid that I am forced to explain to him that we are in a committed relationship. That means we are exclusive and we are not inviting anyone in “just for a night,” whether they are a man or a woman.

At this moment Ibrahim completely changes. He stops asking and looks hurt. He walks away and we all go back towards the cafe nearby.

As we use the toilet Ibrahim sits near us but looks pissed off. I walk up to him and ask: “are we still friends?” He doesn’t answer. We make plans to drive back to the hotel.

The night is over. They have absolutely no interest in being friends with us at all.

This time Jodie goes with Ali, who doesn’t drive like an idiot. I will be driving Ibrahim’s quad bike and doubling him instead. In my head, I believe that if he can’t drive, he can’t act stupid. How wrong I was.

We take off and after not even 10 seconds Ibrahim grabs the handles and steers the quad so close to the edge and up a steep hill that my life literally flashes before my eyes.

At the top, I slam on the emergency foot brake.

I am fucking pissed-off.

How many fucking times do I have to tell this guy things before he gets it in his dumb head? Trying to show off when I have explicitly told him not to be stupid.

I get off the quad in a huff and walk down the hill towards the hotel. Ali and Jodie drive up alongside me and Ali slows down to let me on. He takes us home and we say our goodbyes. For the next week in Göreme, we do everything we can to avoid seeing these guys again. A difficult feat when their office is on the way to all of the sights.

The morning after we wake with a waste of a hangover and I’m feeling sad. After not making any friends in Greece and Turkish people just being so damn nice, I had high hopes for the possibility of a friendship with these guys.

The fact that they had only been so nice to us because they wanted to sleep with us had me questioning all of my past friendships with men, especially while travelling as a solo female. It dawns on me that most of my friendships on the road have been with men. I would say the ratio is probably 70:30.

Had all the awesome men I’d met on the road only befriended me because they wanted to give me a bit of a poke?

Do I not have anything more to offer a man than my vagina?

Am I not the awesome, fun and funny chick I’d always had in my head?

Am I literally just a walking V-Jay-Jay?

I start a conversation about these past events and how I’m feeling with my best friend at home in Australia.

He explains: “men can be dicks sometimes,” and of course this is true. But at the risk of sounding like a flaming mennist, it can’t be all of them.

I am feeling pretty down on myself at this point. James and I talk about how Ibrahim probably felt emasculated by us not “wanting” him.

James points out that the idea that women would prefer to be friends with a man sometimes makes them feel as if they have failed at being a “real man”. As if they’ve done something wrong.

Instead of seeing the friendship, or “friend zone”, as being an awesome opportunity, they see it as a failure. And I’m thinking how shitty this idea is for everyone involved. Now, instead of all of us hanging out and having a good time, having a laugh, getting to know each other…

Instead of this, Jodie and I are avoiding them like the plague, going the long way around town so as not to walk past their office again.

I have more than a vagina, I have a sense of humour and goddamn it Imma make you fucking laugh.

*Names have been changed. I don’t want my fellow lesbians turning up to their doorstep with torches and pitchforks. Just kidding…

Have you ever been in a similar situation? Tell me about it below!

Home » Europe » Turkey » Being Lesbian in Turkey (A Story)