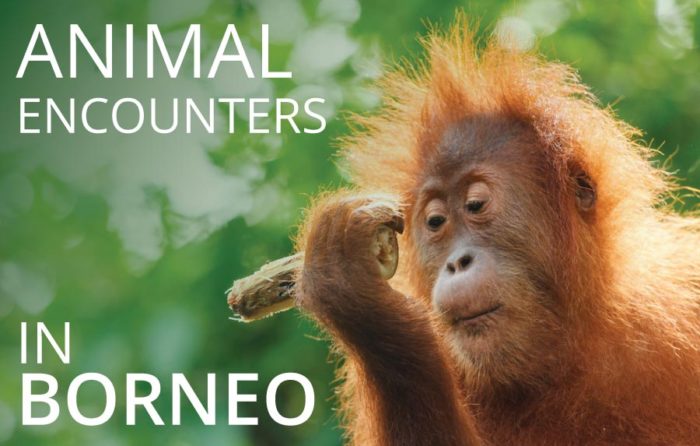 What animals can you see in Borneo?

It’s always a dream to see an unusual animal while travelling, and Borneo is full of awesome animals you can see in the wild and in sanctuaries. Think orangutans, sun bears, pygmy elephants and birds galore! Malaysian Borneo has the most amount of protected areas for animals out of the countries that make up Borneo, so if you are short on time, it’s an idea to just head there! Here is a list of awesome animals that travel bloggers have spotted in Borneo, and how you can see them too.

I am always looking for great animal experiences for the kids that are ecologically sound and ethically responsible. When we decided to visit Kota Kinabalu, I was determined to take the kids to Sandakan, Borneo to visit the Sepilok Rehabilitation Centre and see the orangutans. Orangutans are so critically endangered that I felt if I didn’t do it now, the kids may never see them anywhere other than in zoos.

How to see orangutans at the Sepilok Centre

There are two feeding times (10 am and 3 pm) when people are invited to visit Sepilok and we chose the morning feeding time. We arrived at 9 am and went straight into the video information session which was centred around conservation of orangutans and the ongoing effort provided by the volunteers at Sepilok Rehabilitation Centre.

At 10 am we headed out to the feeding platform to await the arrival of the orangutans, we weren’t disappointed, they arrived right on cue. The kids were so excited and we were lucky enough to have a mum and bub visit the feeding platform on that day. I’m so glad we made the trip and on the way out instead of purchasing souvenirs, the kids chose to sponsor an orangutan for a year. It seems the information session resonated with them.

Aside from the cute and fluffy orange guys, The Sepilok Orangutan Centre is also a sanctuary to the vulnerable Sun Bears. They are super cute, the size of a dog, bark like one and love honey! Malayan sun bears are the smallest bears in the world and they are the second rarest bear species, after the giant panda. But their adorable size makes them at risk to pet-trade poachers.

Most of the bears that live in the Sepilok Centre have been rescued or handed in after being raised illegally in peoples’ homes as pets. When they are babies, their mothers are killed and they are taken from a very young age. As pets, they sometimes never get access to outside areas and some do not develop properly due to the conditions they are raised in. Currently, there is 44 ex-captive sun bears residing in the centre and any bears that are able to be released back into the wild are.

How to see Sun Bears in Borneo

To see these amazing creatures, head to the Sepilok Orangutang Centre in Sarawak between 9am-3:30 pm. The cost of entry is 30 Malaysian Ringgit ($7.50 USD).

By Crystal | Castaway with Crystal

Snorkelling with Turtles in Borneo

Just off the coast of Malaysian Borneo is an island called Sipidan. It’s a perfect little tropical island but what’s really special is actually found under the water surrounding it. Perching on the edge of a seawall, you can explore an incredibly vibrant shallow reef that is also visited by big, deep sea creatures. The best thing about it? It’s a real hot spot for turtles! The reef houses a variety of cleaner fish that give their shells a thorough going over during their pit stops. Below, halfway down the wall, is a cave that turtles migrate to at the end of their lives.

We snorkelled for an hour or so and saw around 30 different turtles. My favourite turtle let me swim next to him for five happy minutes before he dived into the inky blue.  I found the ease of his passage through the water amazing. I was pumping my legs as hard as I can and he was just gliding along next to me, a calm on his face that I’m sure I didn’t share.

How to see Turtles in Sipidan, Borneo

To dive in Sipidan, you will need a special permit, as such, most place only offers dive packages. If you just want to snorkel, try Sipadan Scuba, based in Semporna. They took us and it was amazing!

READ: Don’t Ruin Your Holiday! Bring Your Own Snorkel Mask

From the jungle to the beaches, Bako National Park is home to almost every type of vegetation in Borneo and is filled with roaming wildlife from macaques, the Bornean bearded pig to the rare proboscis monkey, found only in Borneo. The monkey is prominently known for its abnormally bulbous nose, large belly and long tail. Best times for sighting the proboscis monkey is early morning and late afternoon when it feeds in the trees; the monkey is neither shy or quiet as he tugs and gnaws at the best leaves.

How to see Proboscis Monkeys in Borneo

You can reach Bako National Park from Kuching by bus or taxi, and catch the ferry boat to the island. It’s best to plan for a 2-3 day stay so you can explore the park’s 18 photogenic scenic hikes, wildlife spottings and even go on a night safari. Highly recommended for all types of adventure travelers.

One of the most incredible wildlife encounters that I’ve ever had was within Bako National Park in Borneo.  I grew up watching National Geographic shows about the wildlife, but I never dreamed that I’d get to see a flying lemur in the wild.   Bako National Park is one of Malaysia’s most famous national parks, and it’s best visited over several days as it’s only possible to go on a night tour with the experienced park rangers where you have the opportunity to spot rare nocturnal species, such as flying lemurs, in the wild. There’s obviously no guarantee what you’ll see once you visit Bako, but it’s a great place for animal lovers.By Karen | Wanderlusting KREAD:How to Choose Snorkel Fins Right For You!

The pygmy elephants of Borneo look in real life just as cute as they sound. They are a lot smaller than Asian or African elephants and have oversized ears, shorter trunks and tails sometimes so long they drag on the ground. DNA evidence has proved that these tiny elephants are genetically different from their cousins on the mainland after being isolated for 300, 000 years.   But these elephants are losing their habitat, fast. With only just over 1, 000 individuals left, there are major conservation efforts in Borneo for the Pygmy Elephant. However, the increase in global demand for palm oil has led to an increase in human-elephant conflict and the elephants have been known to destroy farmland. The elephants are severely threatened by habitat loss as logging and deforestation continue to make way for palm oil plantations.

How to see Pygmy Elephants in the wild in Borneo

Seeing Pygmy Elephants in the wild is a difficult feat. The tiny elephant is at home in the lowland forest and so are very difficult to see. However, they do swim well and often cross river barriers in order to move around their home ranges. This means spotting them on the Kinabatangan River is probably your best bet! From Sandakan, you can travel to Kinabatangan for the 3-day boat cruise. These include two nights accommodation on the river, all meals, boat tours up the river and other activities. On the river, you have the chance to see orangutan, proboscis monkeys, macaques, hornbills, kingfisher, crocodiles and snakes.

By Crystal | Castaway with Crystal

Here we are, crossing the whole of Borneo by bicycle, entering into the small and somehow mysterious Brunei Sultanate. We expected a dense industrialized area but, as usual, the reality is completely different from our prejudice.

Brunei is famous for its oil resources, that made is Sultan among the richest persons in the world, and the citizen look well-off too. Outside each of the big houses, at least four big cars are parked. Despite so, there are very few vehicles on the streets, which for the most part are lined by thick jungle. We are often surrounded by strange noises of birds, insects, and macaques. Macaques are everywhere, sometimes threatening.

But the real surprise comes when we’re almost leaving, less than 10km from the Malaysian border, right in the middle of the road, a couple of majestic hornbills. I try to approach slowly, they sense me and fly on a nearby tree. Hornbills are a highly endangered species, only a few are left in the whole Borneo, to spot a couple it’s more than a lucky strike! Other places to see hornbills are the conservation centre, and Logan Bunut National Park, both in Sarawak near Miri.

It’s always amazing to see rare or endangered animals or animals that you grew up watching on TV in real life. But before you do any activity that is animal-related, always ask yourself this: “Is this animal suffering for my benefit?” and then decide if the activity is still worth doing.

This post was a collaboration put together by some of my favourite bloggers, if you want to know more about them, click on the link under their section!

Seeing these awesome animals in Borneo is just the first of a series of posts featuring amazing animal encounters from all over the world. If you liked this post and want to see more, please follow my Facebook Page to be notified when I post the next one!